Following our abduction by the vile tyranid creatures I cannot be sure about time anymore.

During the initial attack all of us had sustained wounds that led to our capture, and were in various states of consciousness. The xenos creatures apparently carried us off to their lair deeper inside the ship’s body, placing us in bionic holding devices for later use or study. The undead damaged powerless Eldar female seemed to be of special interest for them. I wonder why?

While I am glad to say our blessed ceramite armour withstood their best efforts, they found their way through the softer seals to inject a kind of hallucinogenic nourishing fluid, which caused a number of strange visions, punctuated by brief spells of consciousness.

It is a testament to Brother Calidus’ reflexes and dear staunch Brother Ambrosius’ resilience that together they eventually managed to overwhelm and kill the genestealer magos, and subsequently free all of us from those sickening cocoon structures, including the Eldar female who seemed to be quite worried about Brothers Azrael’s and Calidus’ health.

After a brief assessment of the situation it was deemed imperative to reach the gunship. Total annihilation of genestealer xenos was not necessary to achieve this objective.

The Eldar female suggested ingestion of available genestealer brain tissue to determine the safest and fastest route. How in the name of our Blessed Primarch does this xenos she know this?! The idea carried some merit, however, and Brother Calidus volunteered for the distasteful task. Fastest exit route was through the bulkhead at 1200 and down a service shaft.

It was fascinating to observe the tactical coherence among my four Brother Marines and the Eldar female again, the xenos Eldar presenting the most exposed target in the soft flak armour that had been put on her. At the slightest prompt from esteemed Brother Ambrosius they formed a two-tiered cordon around Brother Ambrosius and the Eldar, and I easily found my place among them. Meanwhile the xenos Eldar herself ran over to the bulkhead and started searching for a way to open it, even though it looked as if the concept of a doorhandle was rather new to her.

Already the genestealers were pouring into the room through a pipe end, leaving Brother Sergeant Azrael and myself barely a chance to fire our bolters before they were upon us. We dispatched two, but two more were still charging at us, and yet more could be heard coming from all around us.

We killed those two in fast hand-to-hand combat, while Brother Calidus shot another that was trying to circumvent us, coming from a side corridor. As the Eldar had opened the bulkhead, we withdrew into an even tighter formation, and Brother Ambrosius strengthened our resolve with his psy force when the next wave of genestealers hit us.

We fired our bolters for what it was worth, but a fraction of a second later it was down to frantic hand-to-hand combat again. Brother Damian, Brother Sergeant Azrael and myself took the brunt of it, while Brothers Bethor, Calidus and Ambrosius kept firing their pistols into the fracas. Damn those genestealers and their claws! Brother Damian, heroically holding our left flank against three of them, was severely wounded, while Brother Sergeant Azrael displayed outstanding vigour in killing his two attackers violently and efficiently.

The Eldar female, safe behind our double wall of ceramite and enhanced humanity, had opened the service access port. Brother Sergeant Azrael tried to push wounded Brother Damian towards the back while he himself, Brother Bethor, and I took care of the remaining genestealers, yet Brother Damian valiantly continued to stand his ground as Brother Calidus and Brother Ambrosius proceeded to secure the access tunnel ahead.

Seconds later the genestealers lay dead at our feet, Brother Bethor pushed the Eldar into the service shaft ahead of himself, Brother Sergeant Azrael supported Brother Damian to the access point, and I closed the hatch securely behind me just as the next wave of genestealers was arriving.

For the moment, we were safe, for as long as the hatch would hold… 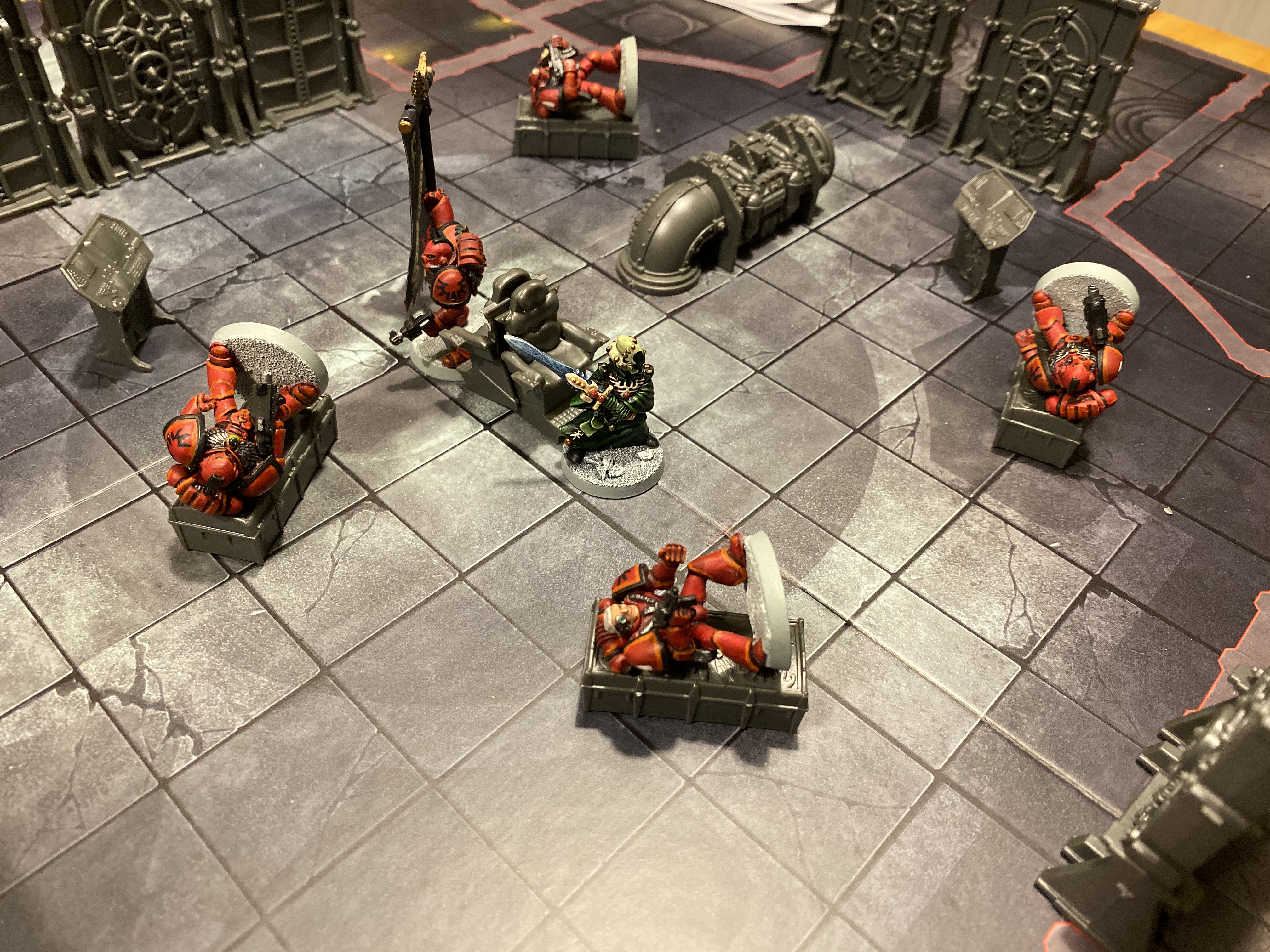 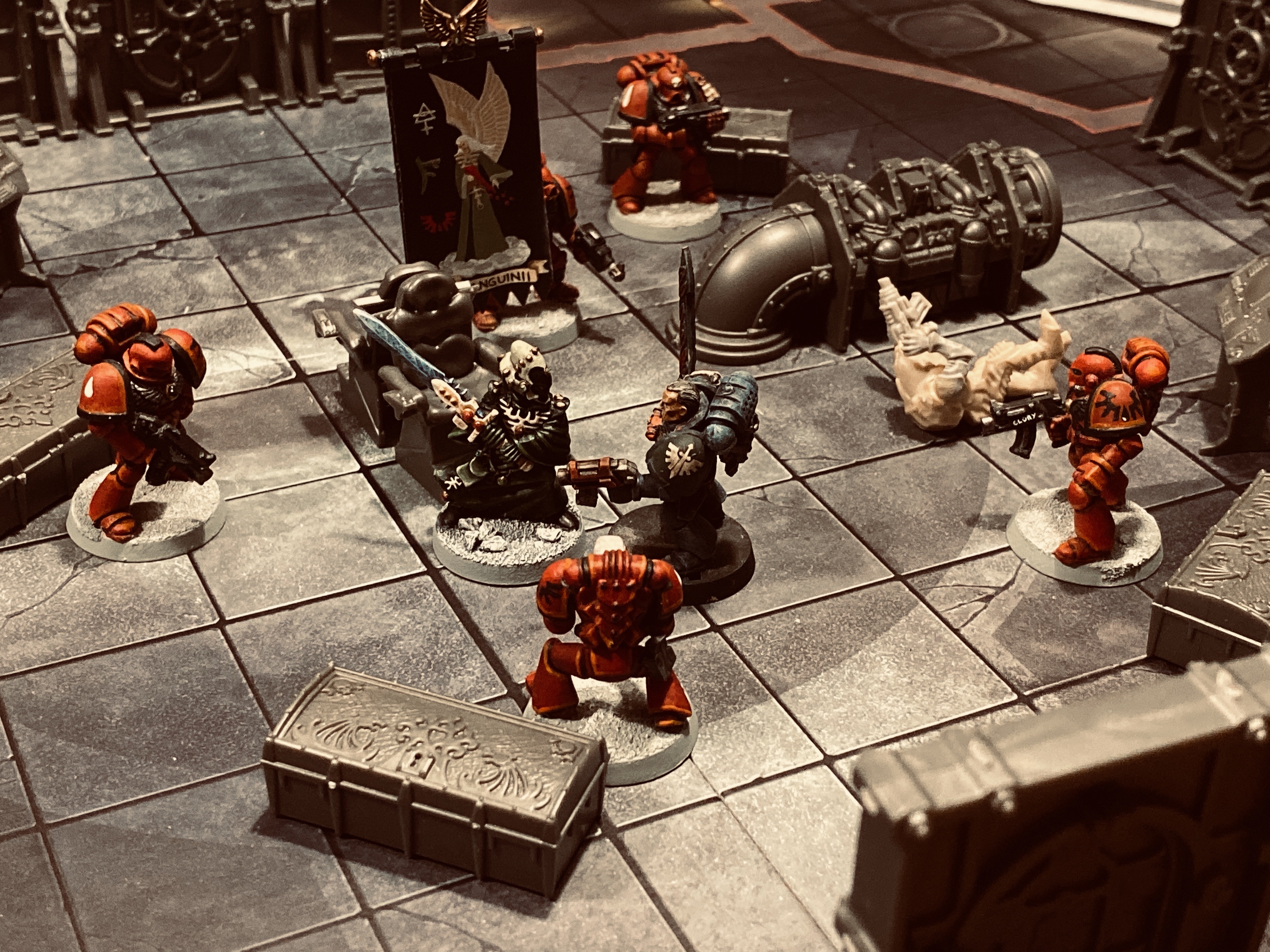 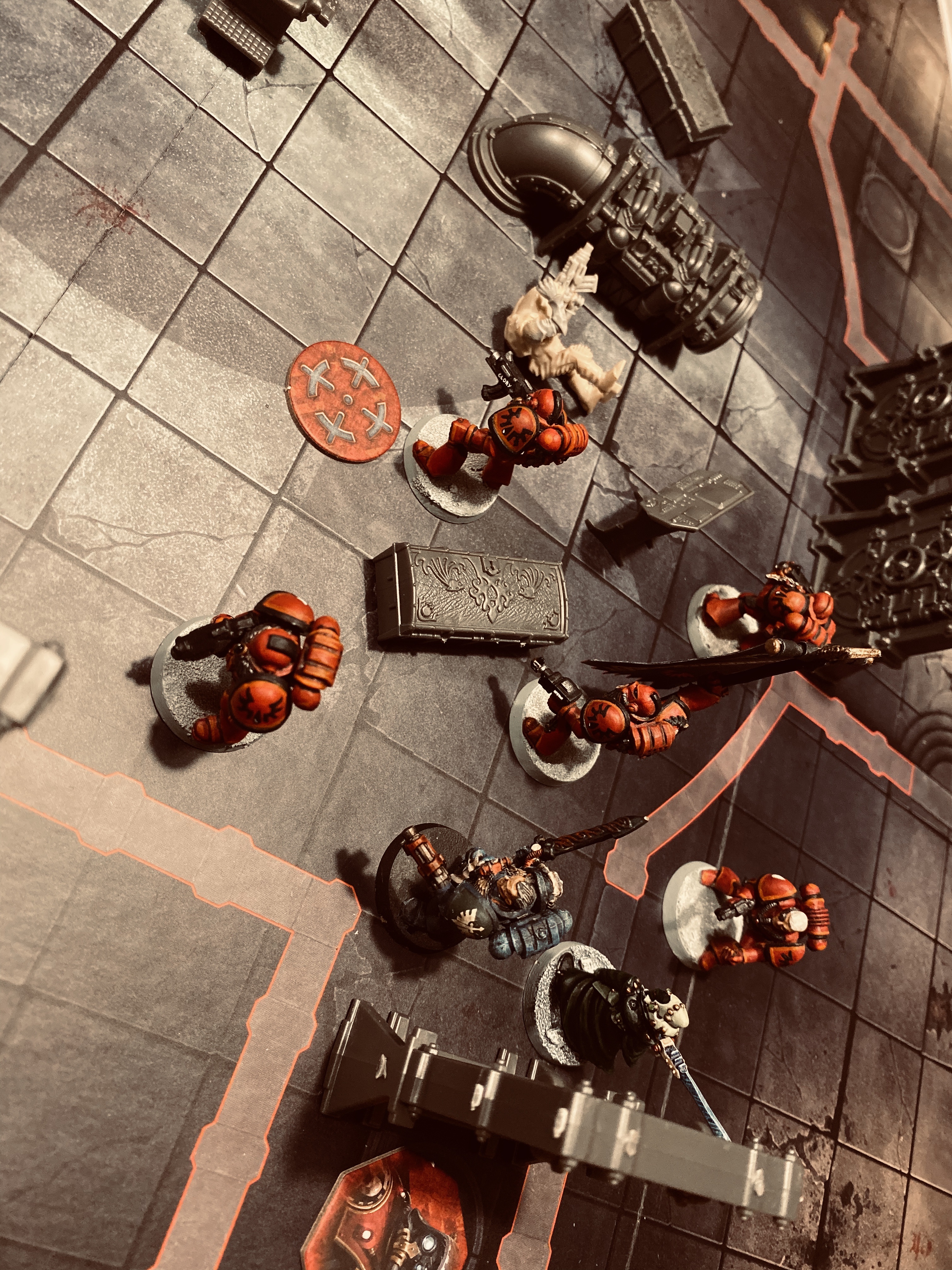 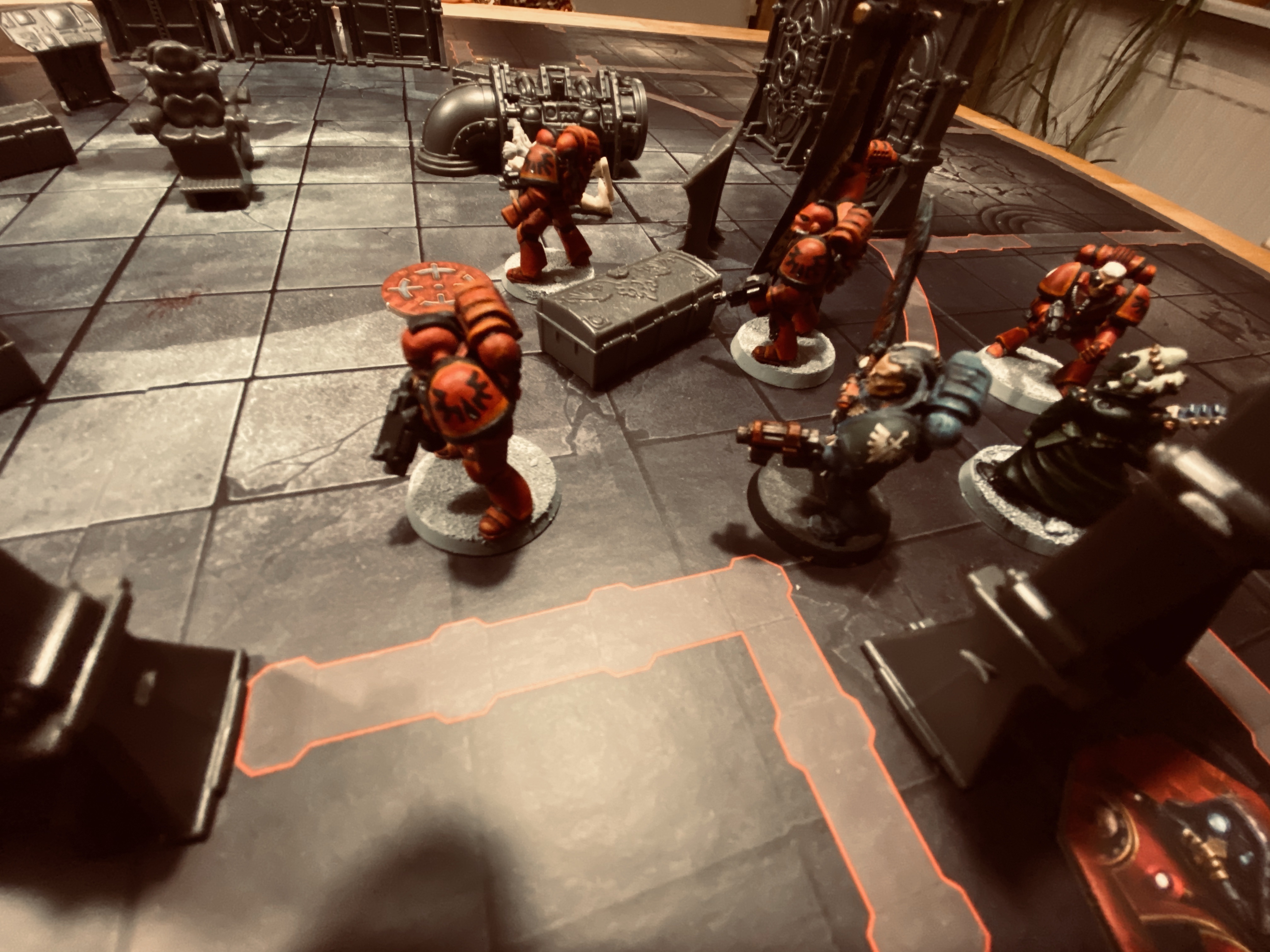 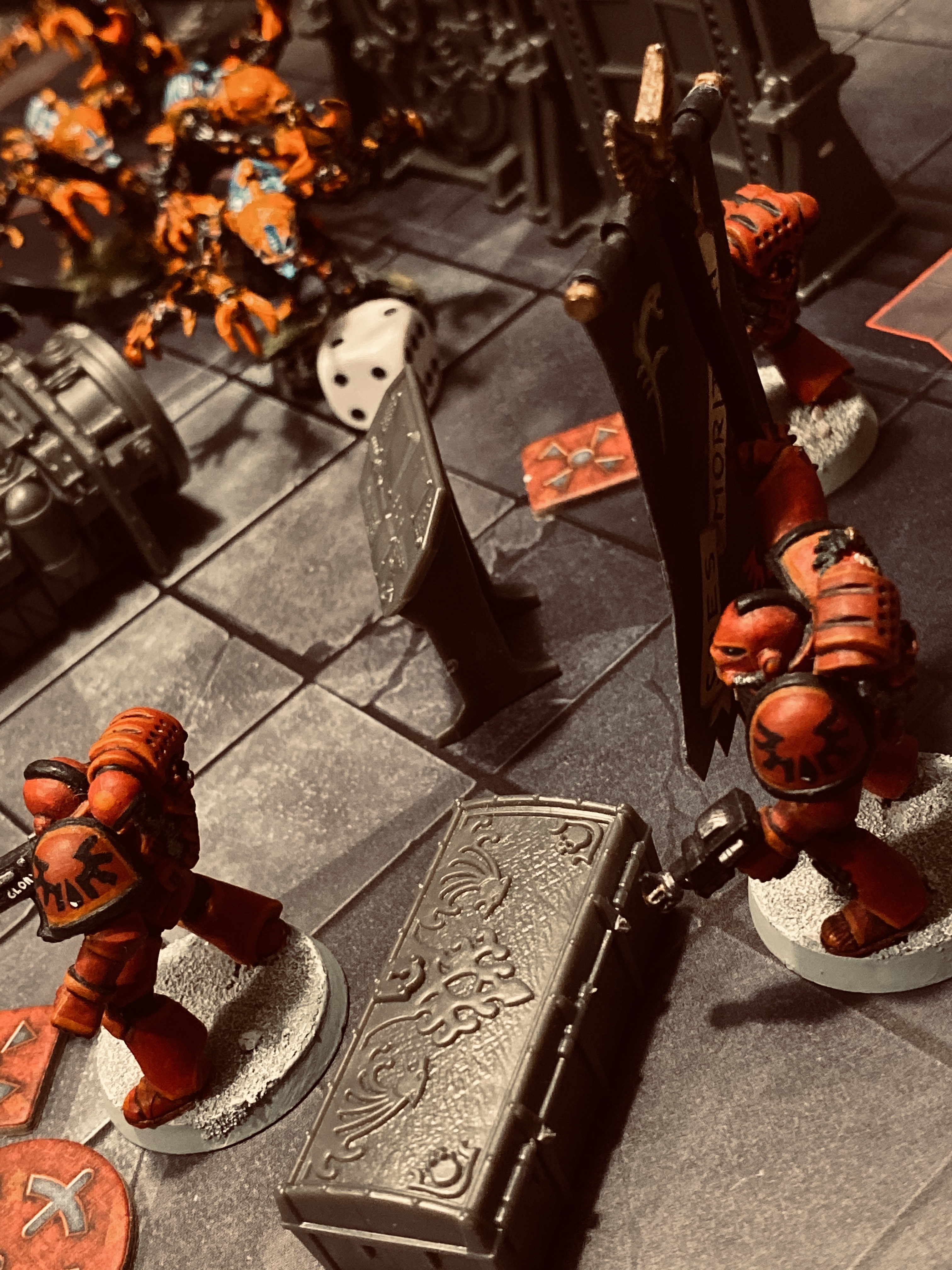 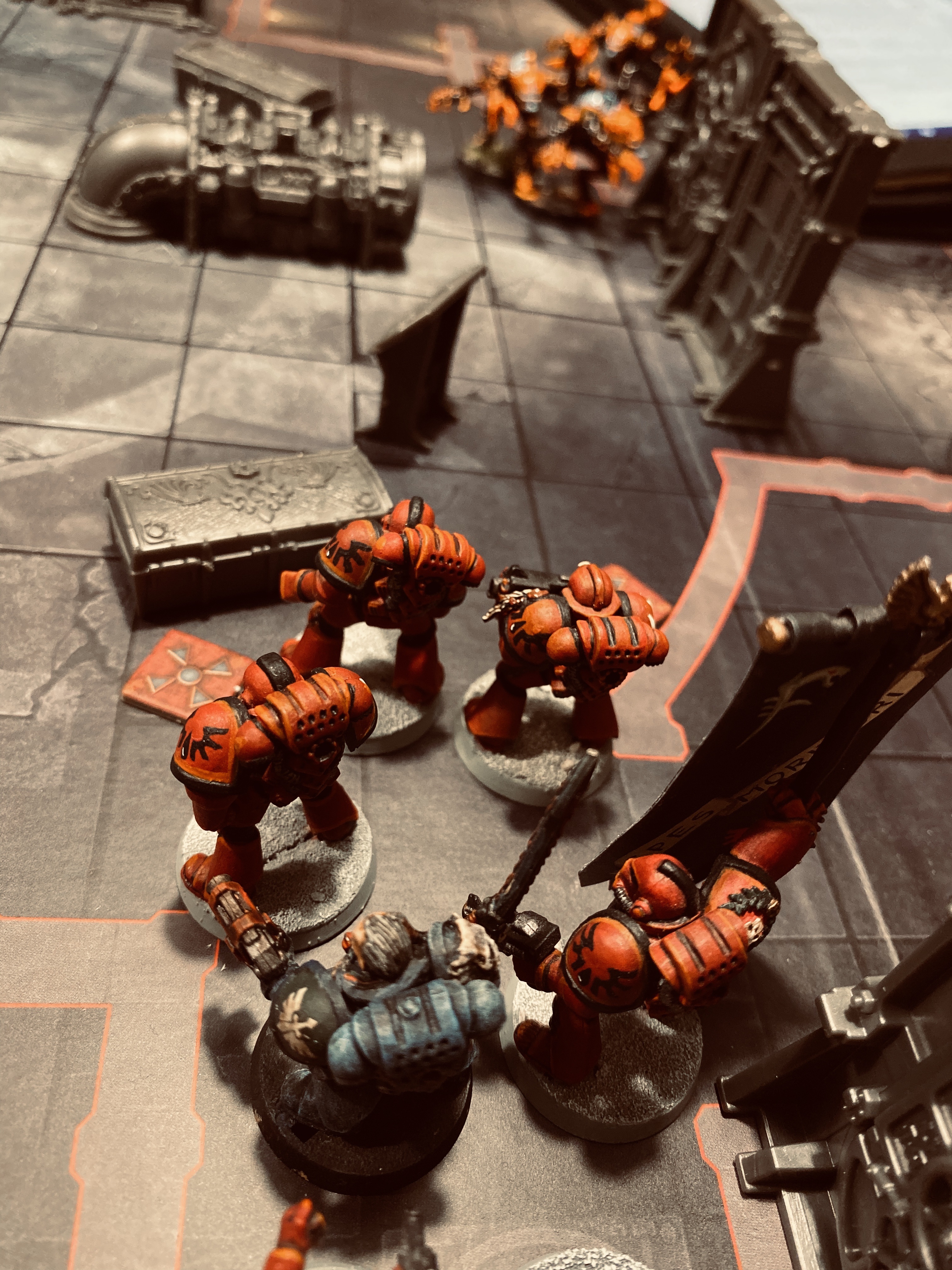 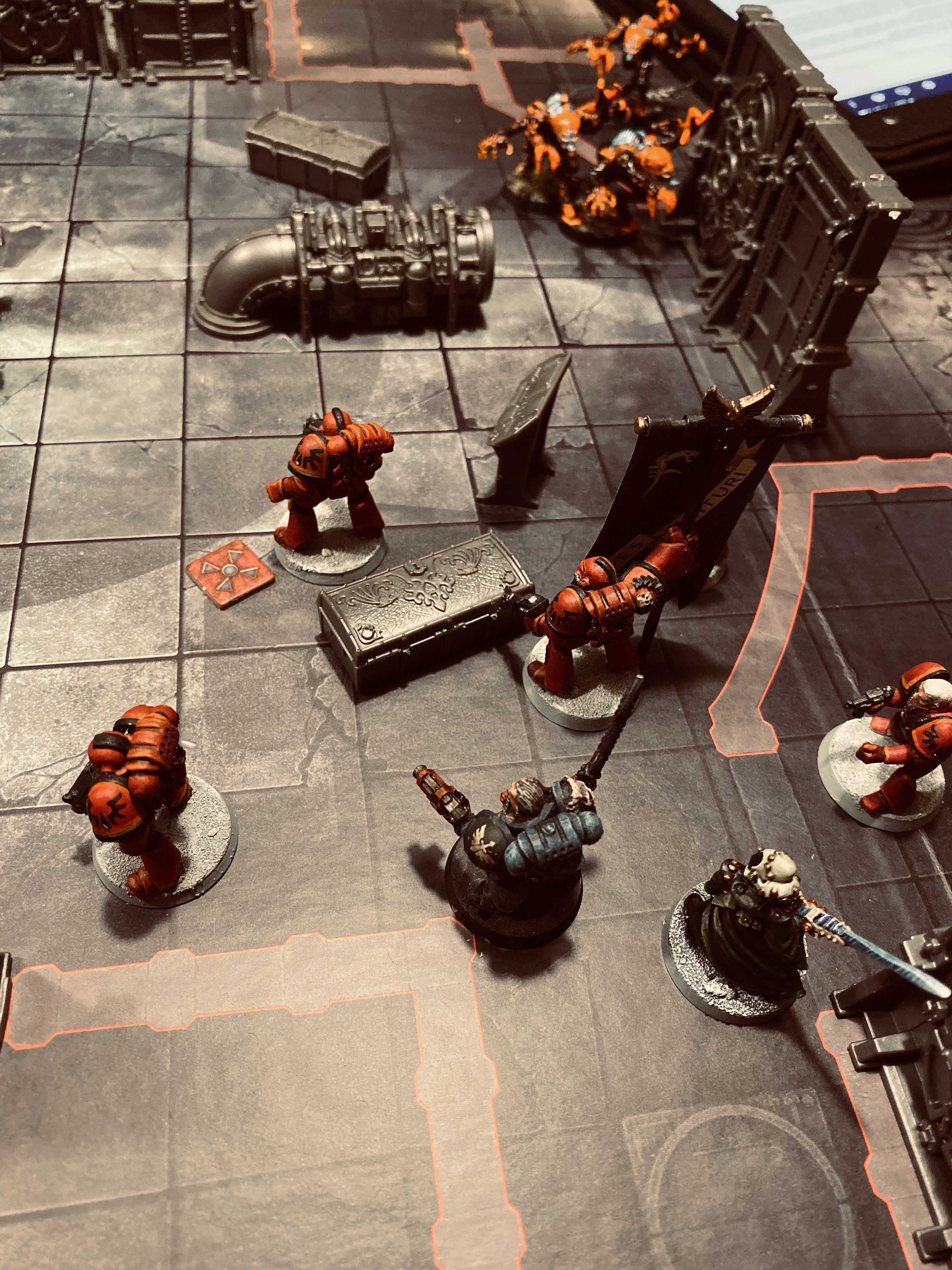 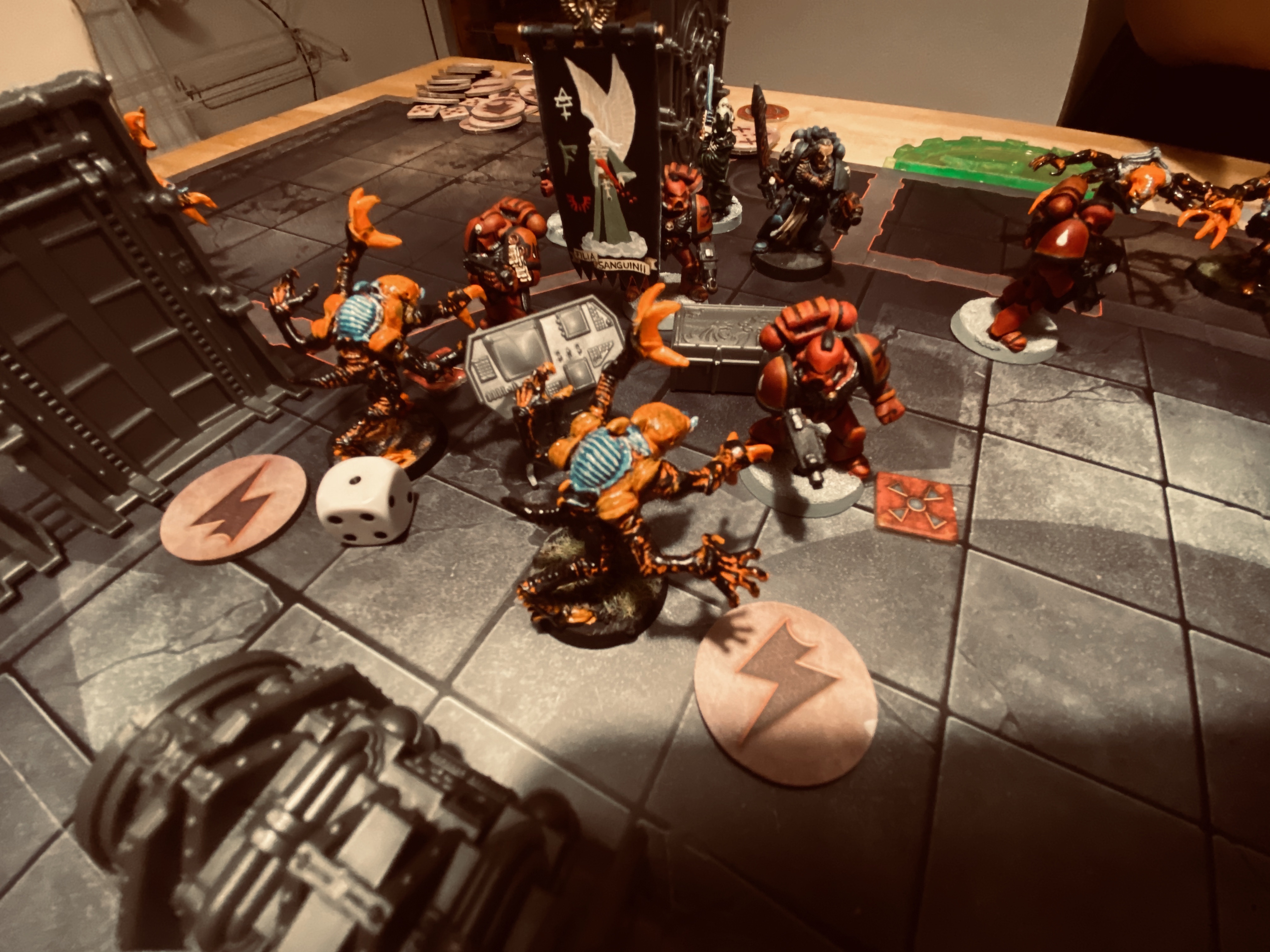 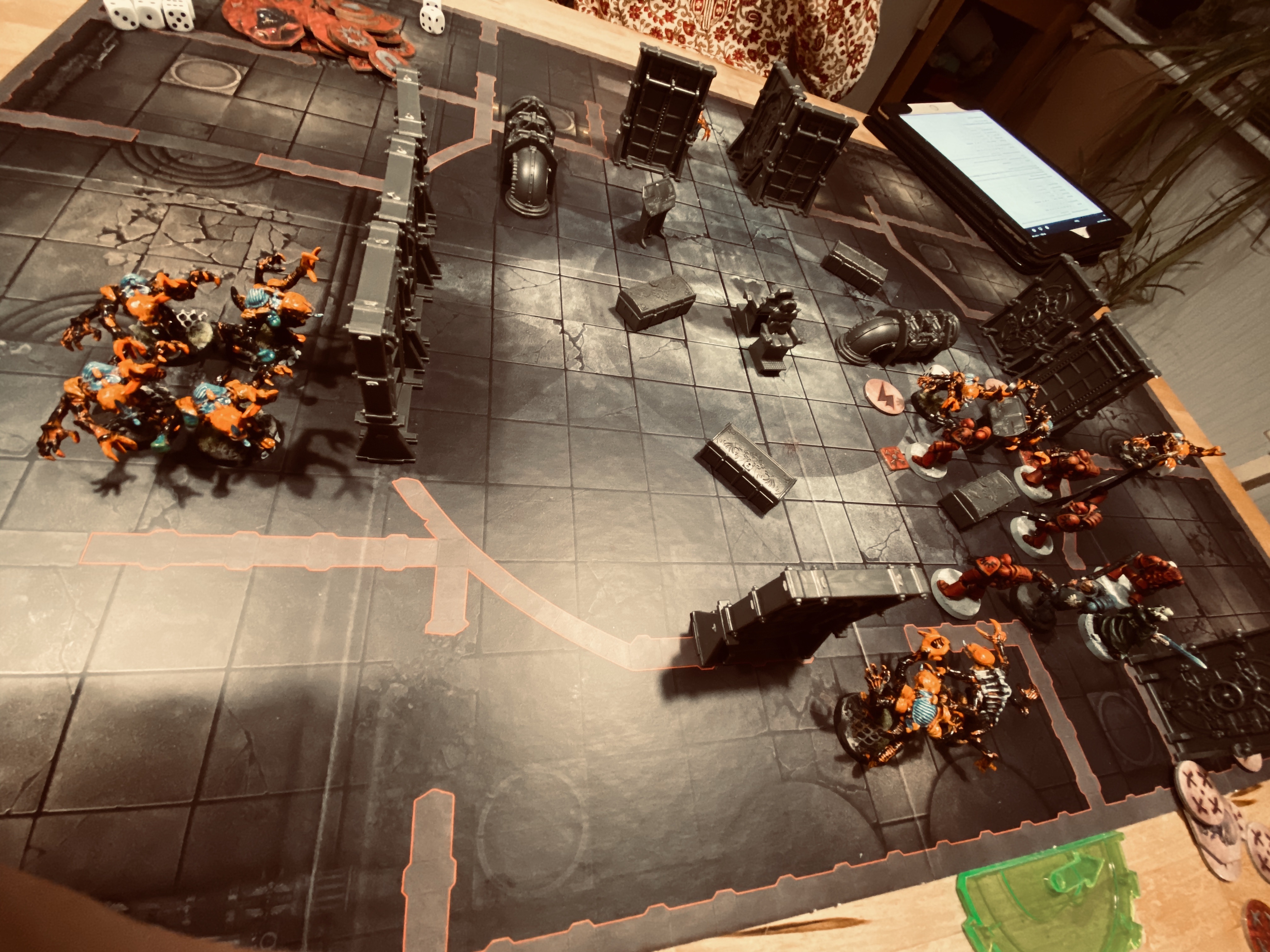 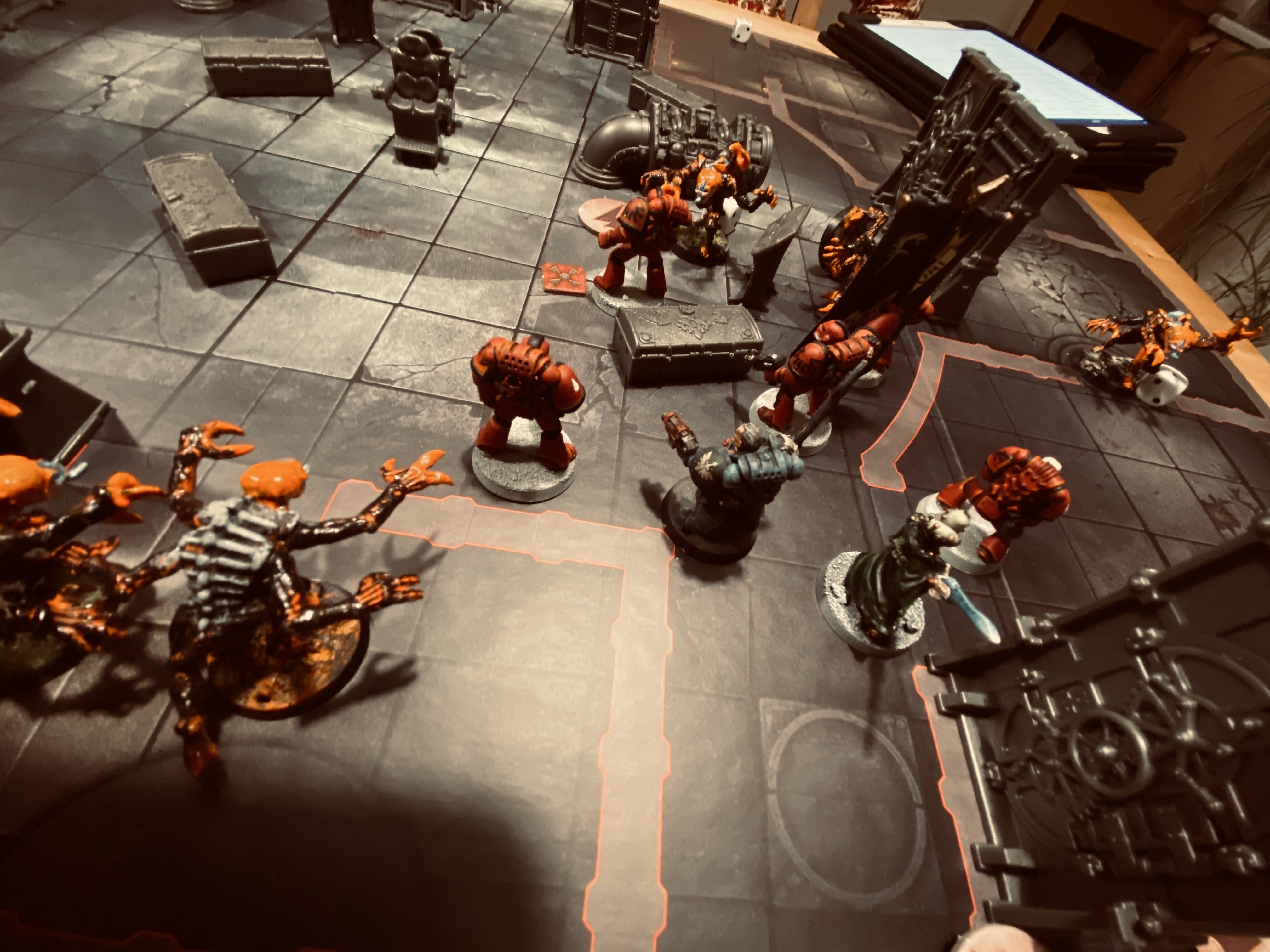 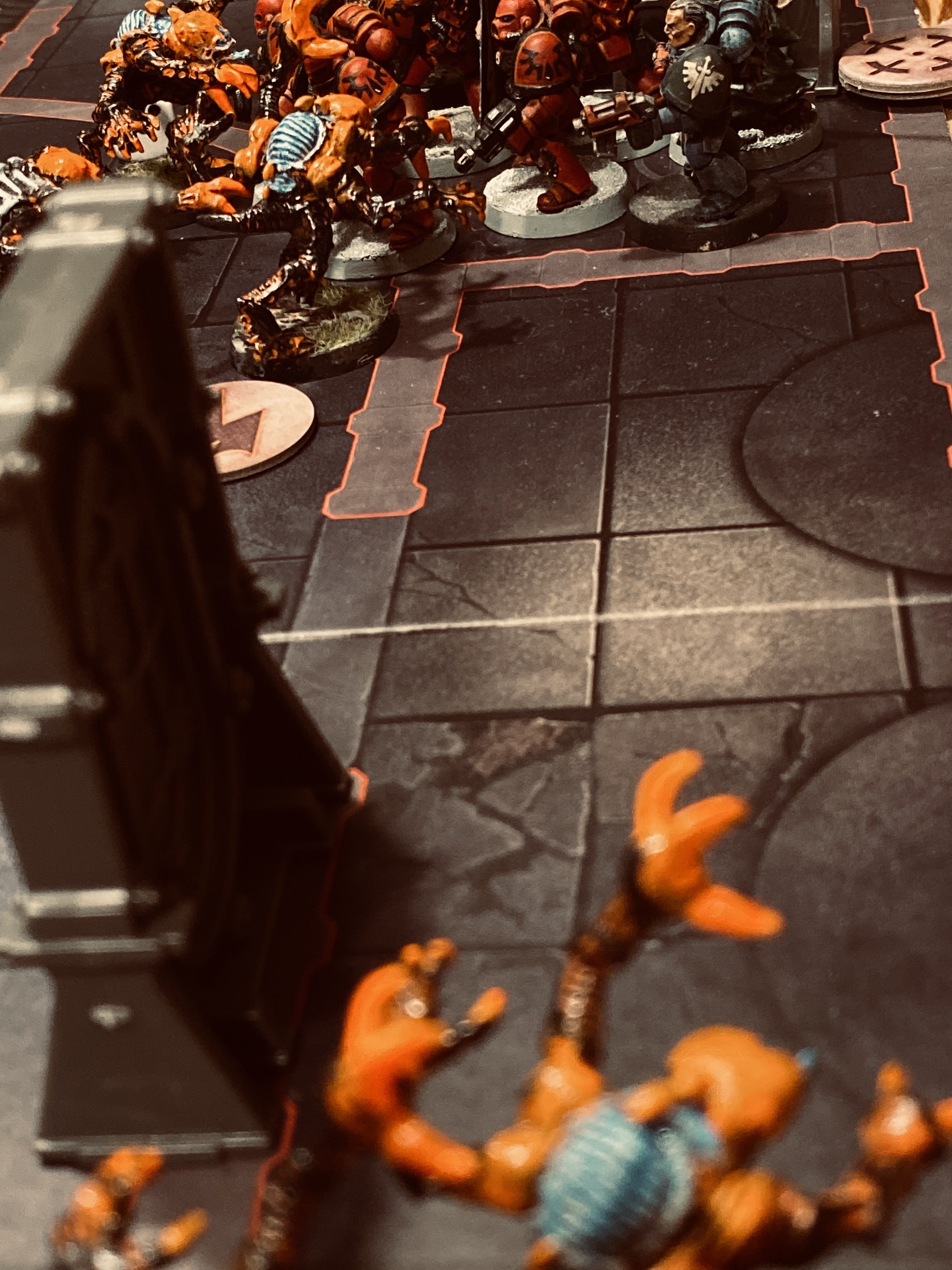 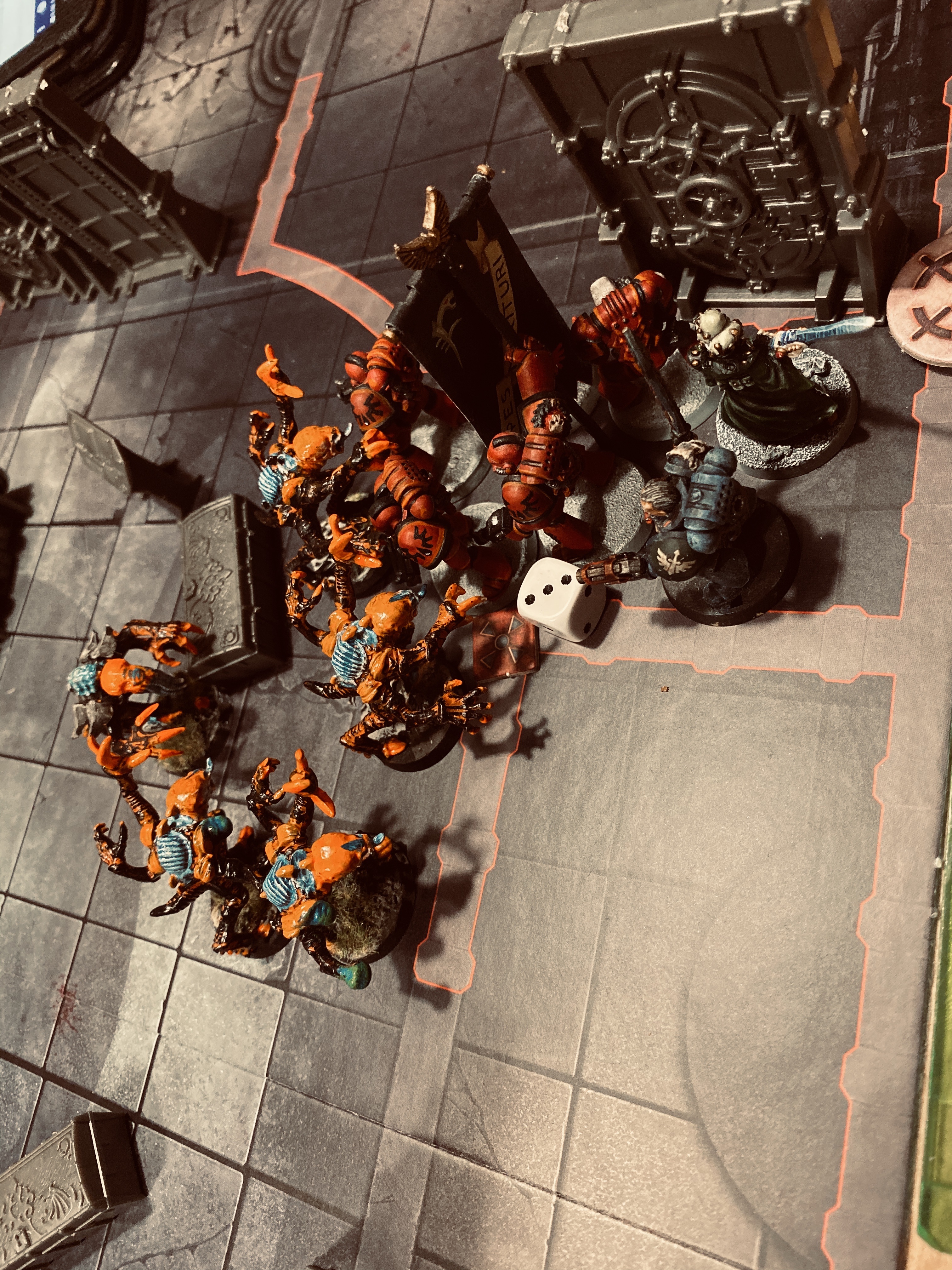 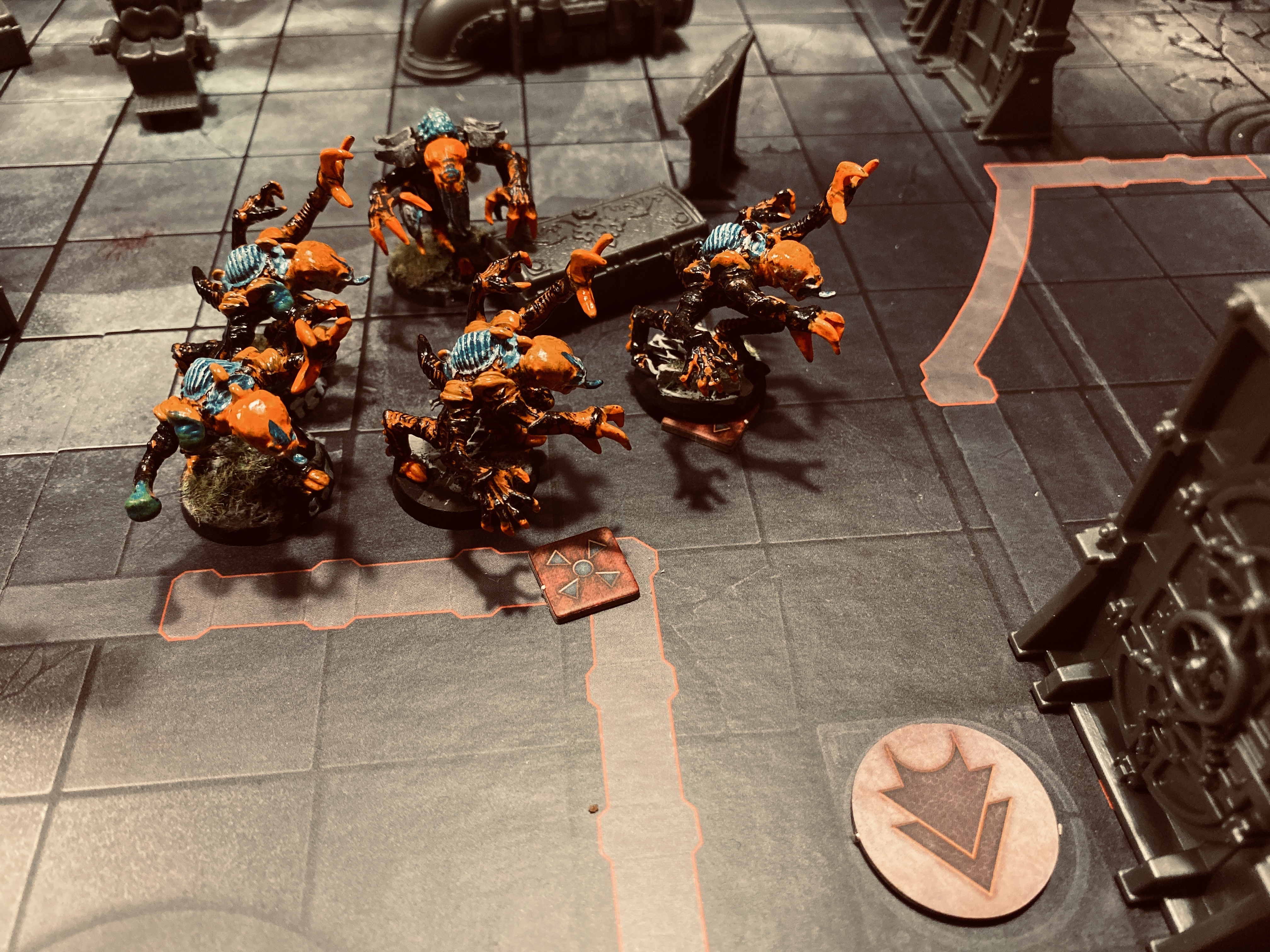 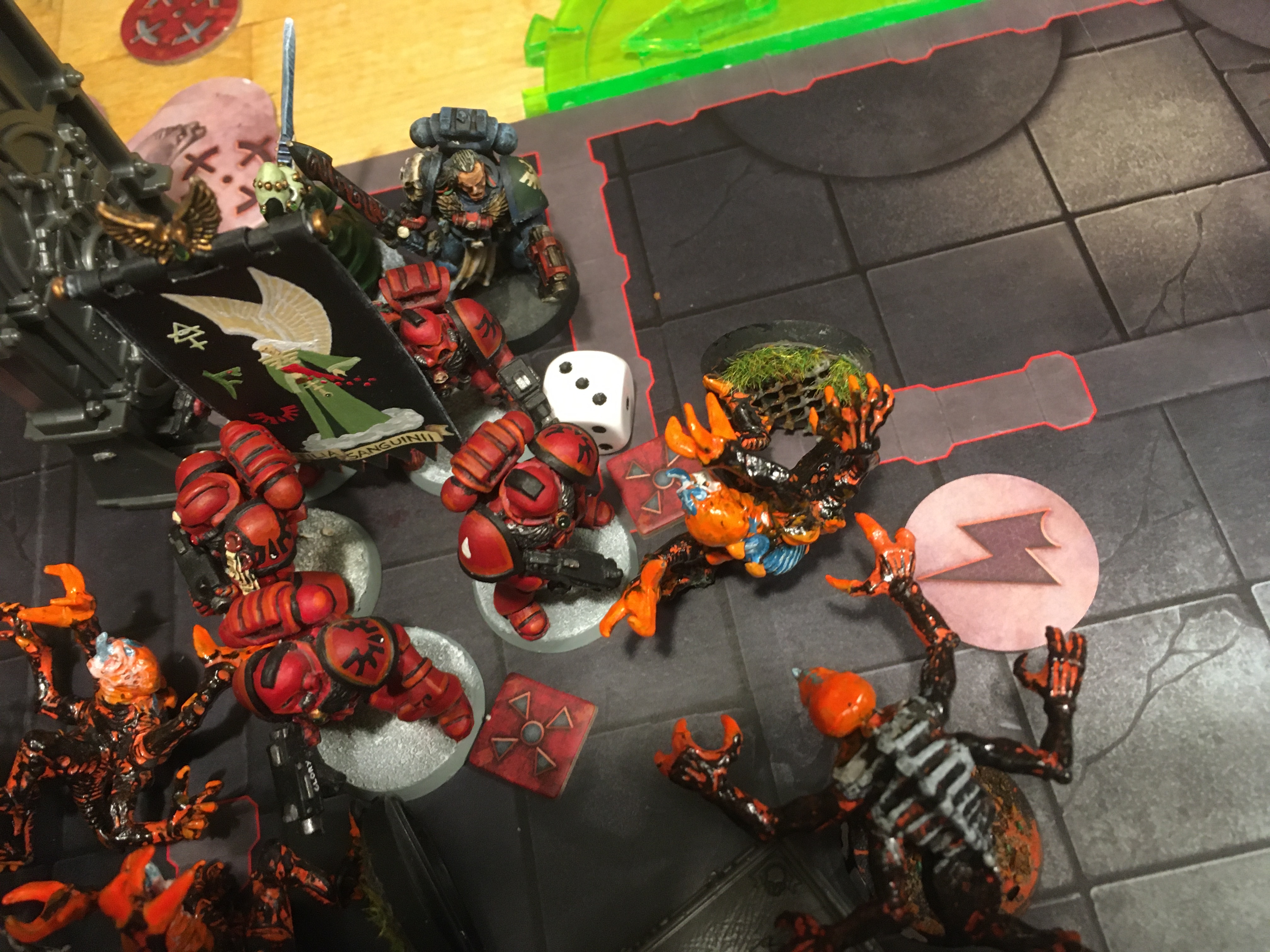 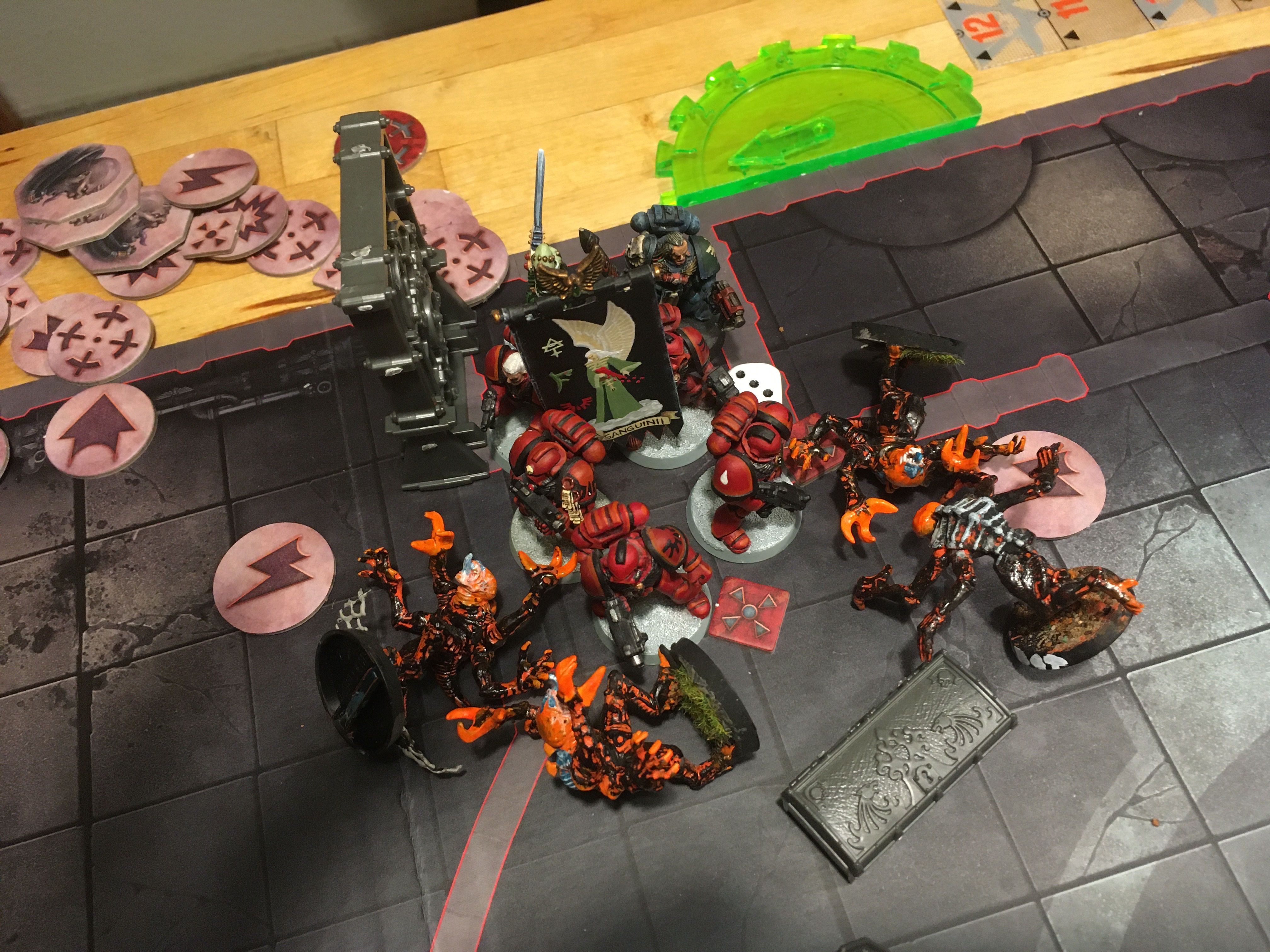