The red warning light was continuous now. The Ships captain Zachariael, a veteran of many deathwatch missions noted this to me. He touched the

control panel with his remaining arm. A pict screen lightend up. Brother Ambrosius saw: A orange claw appeared moved from the left to the right and suddenly ripped something from the ships underbelly.

“The ventral grav dampers from the underbelly. I need this part to lift off.” Zachariael stated flatly.

Ambrosius concentrated to imprint the psionic tag of the claws owner concentrating to not loose the direction it was moving too, and decided there was the need to track down the thief, so there was to be an away mission. It was cearly a lure, but there was nothing to be done about it. As a Deathwatch veteran he knew what they were dealing with. A Genestealer infestation. And they would not let the travel group escape.

So better assemble in strength.

He quickly called his Blood Angel Brothers and Fayak, the rest of the travel group,  leaving the pilot and the autodoc in the ship.
All armed and armor donned, they got ready for battle.
After all: vile xenos invested the hull of the ship.

A few minutes later the group made its way through the ruins of the top layers of the bulk freighter. 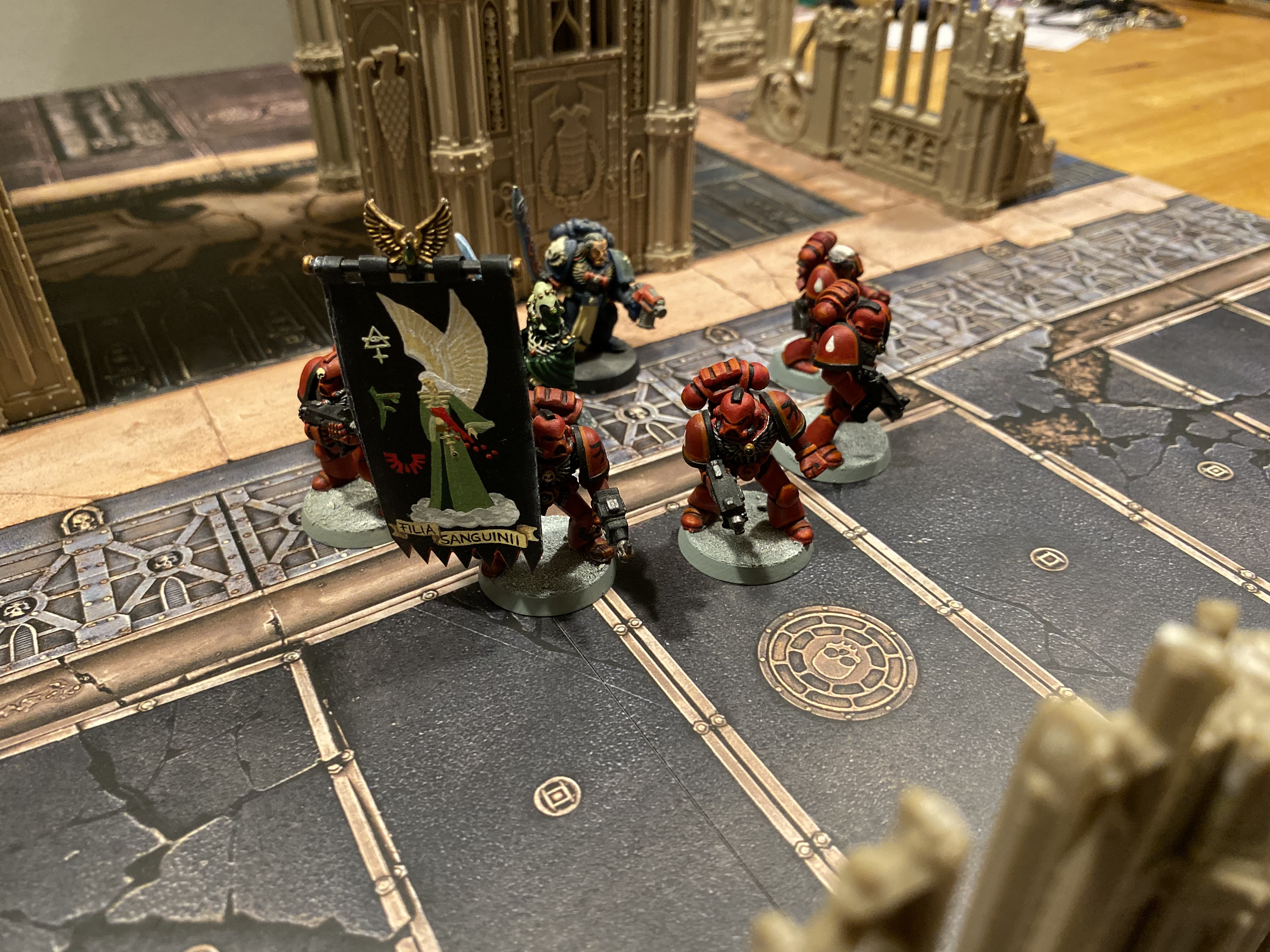 Ambrosius concentrated on the mark he memorized and pointed the goup into the right direction.

“Fellow Brothers, I now see several marks, as if my tracers multiplied or more vile creatures are afoot.” Immediately the troop spread out to not present a single target. 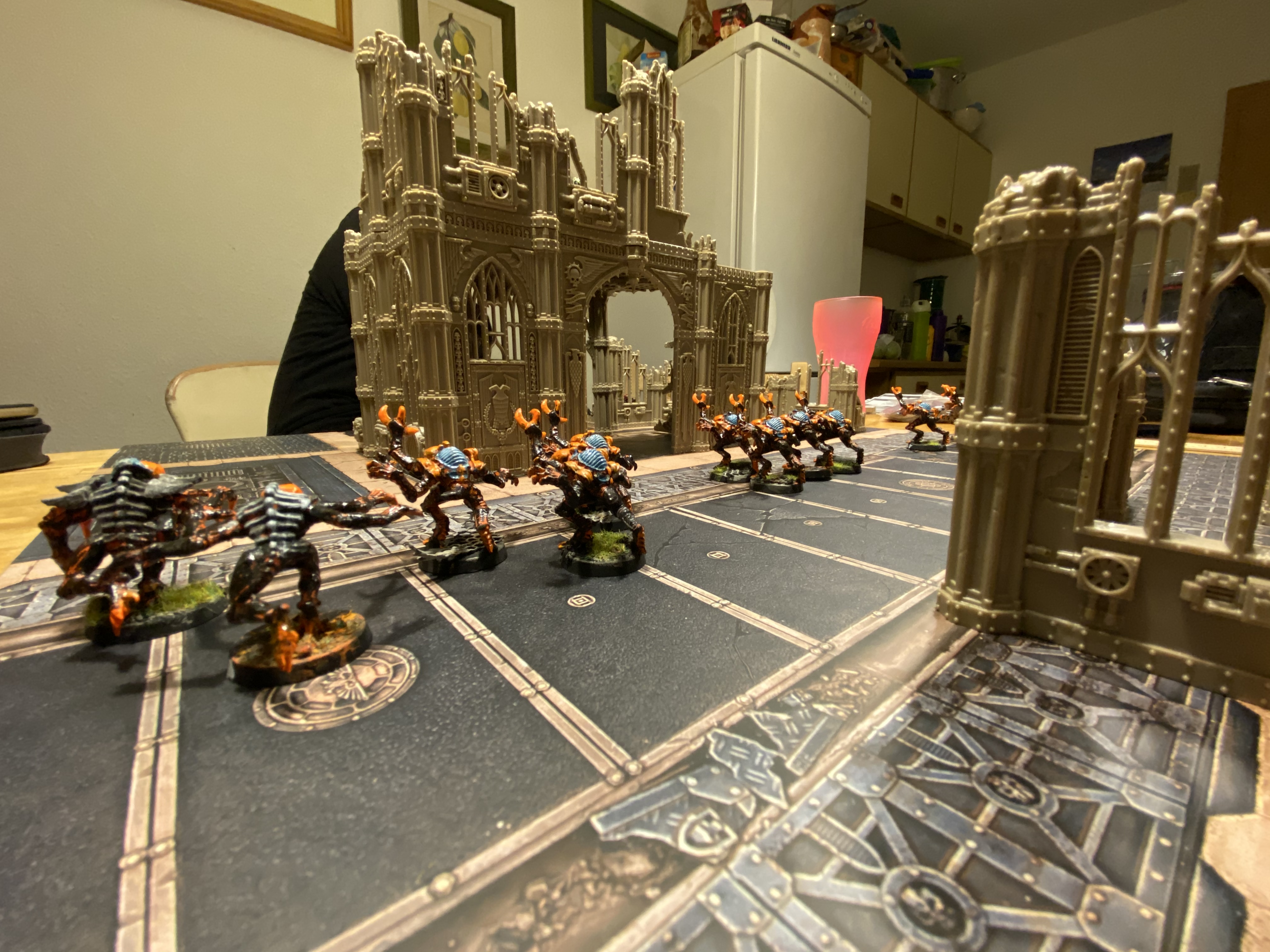 Comparing the different signature of xenos, the librarian sensed the trap was laid well.
The Xenos had lured their bait out. They surely wanted the content of the gunship without exposing themselves to the wrath of gunstations the flyer had all around. 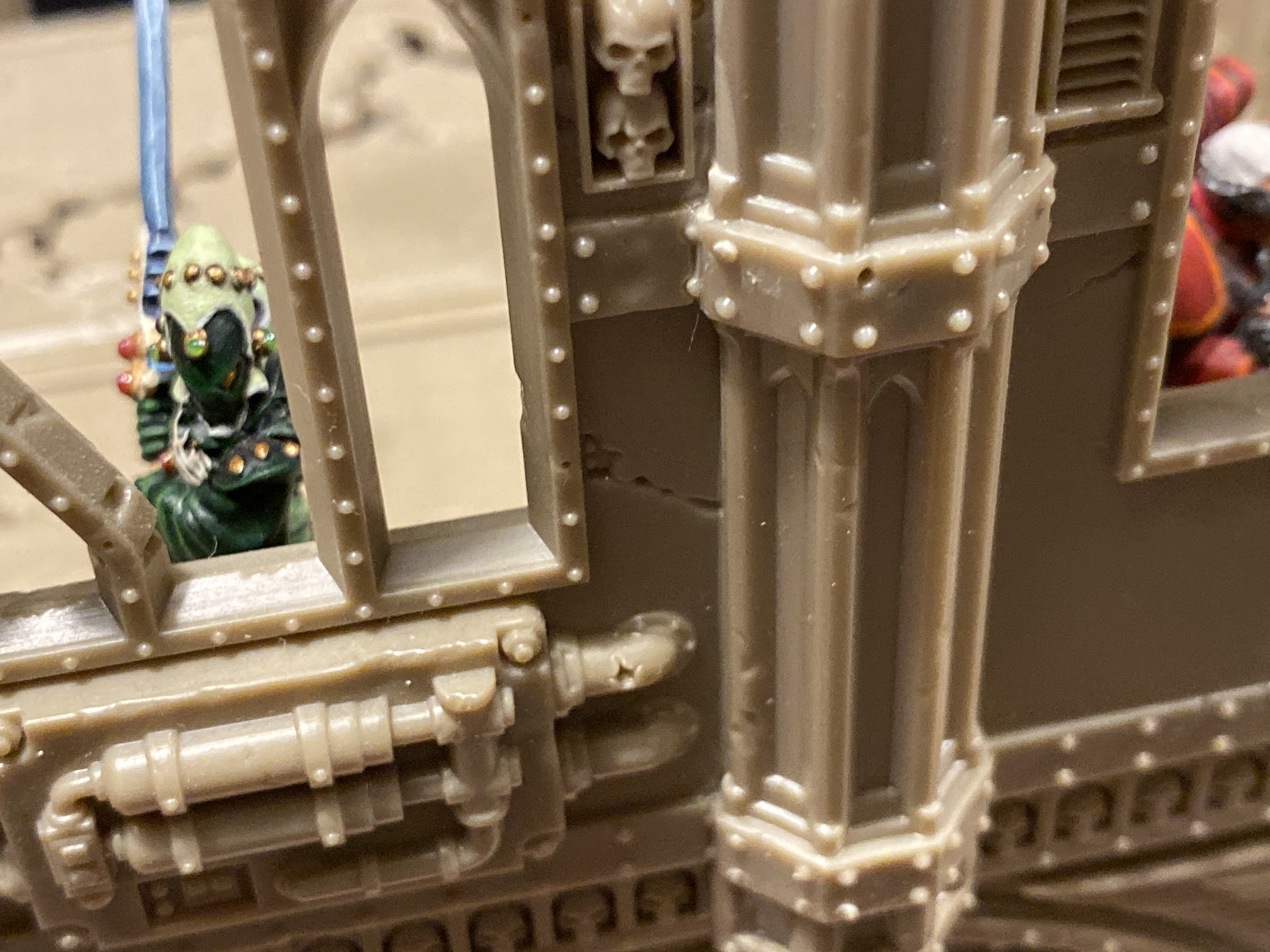 Thinking strategically Fayak distributed the troops in different spot were fire arc would overlay and not all of them would be assaulted by
So not being mindless monsters they now moved from different positions and in several groups to overcome the overlapping defensive field of fire of the marines. 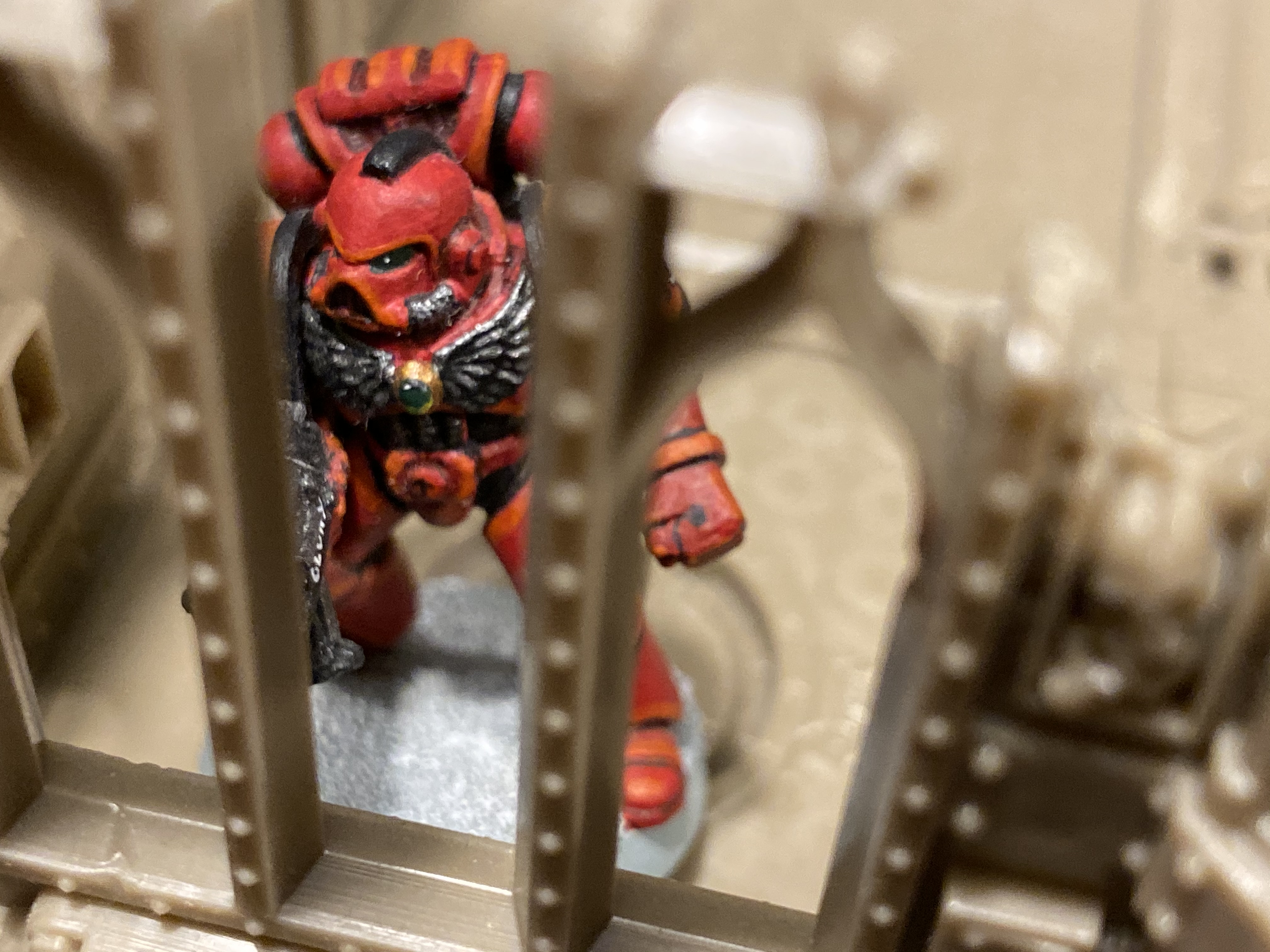 But it all happened too fast. While the Blood Angels pumped bolt rounds into the xenos, carapaces exploded, green gore splattered, high voices shrieked, the advance of clawed bestialites was not to be stopped. 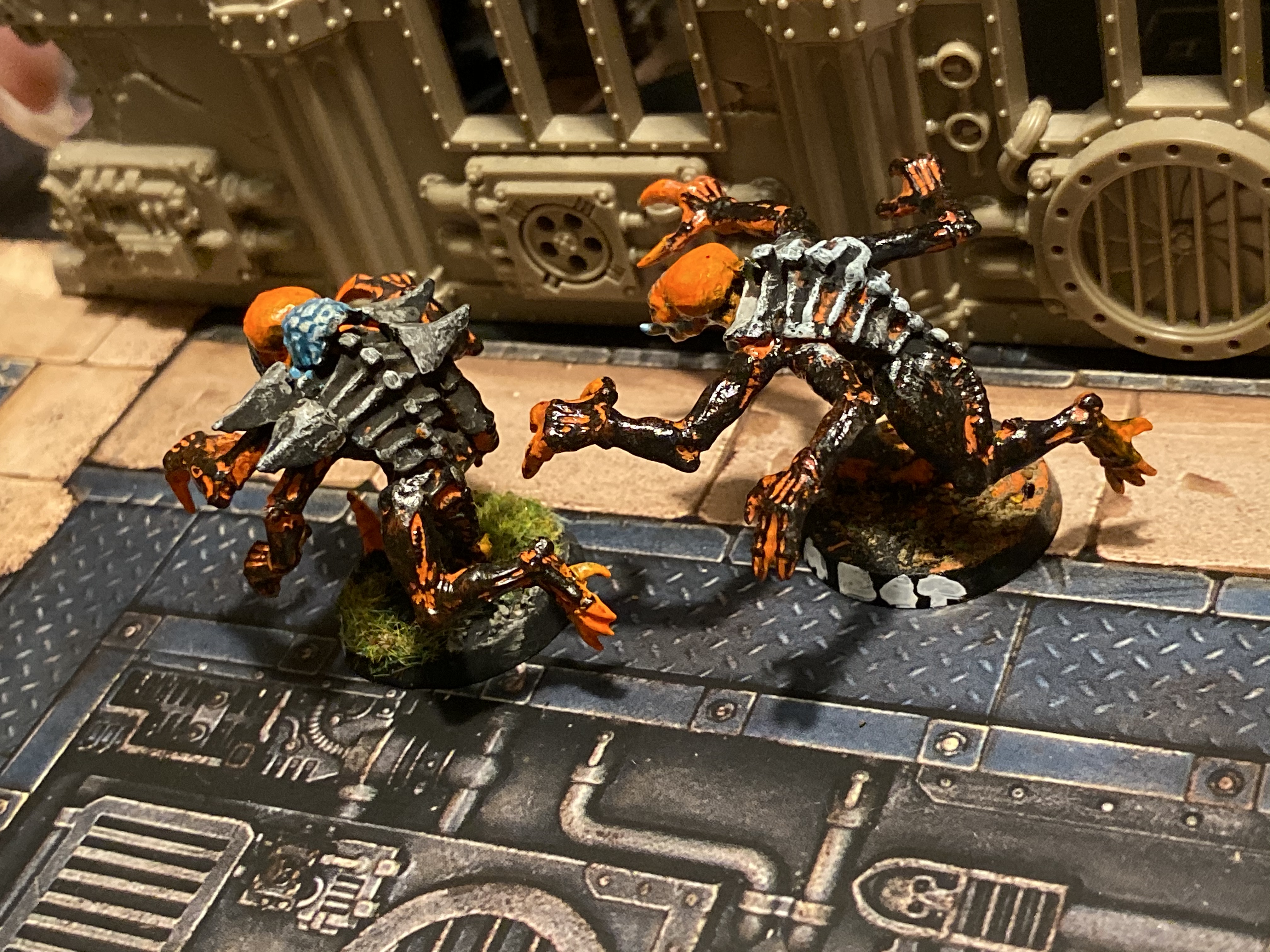 While Fayak and her Guard shot the approaching monsters form the top of a ruined part of an upper ship level, Ambrosius stayed a level deeper “on ground” with the xenos, ready for single combat.

The genestealers were fast, driven on by a big leader and his 3 personal guardian, they quickly swarmed the travel groups by climbing up bulkheads and metal walls. 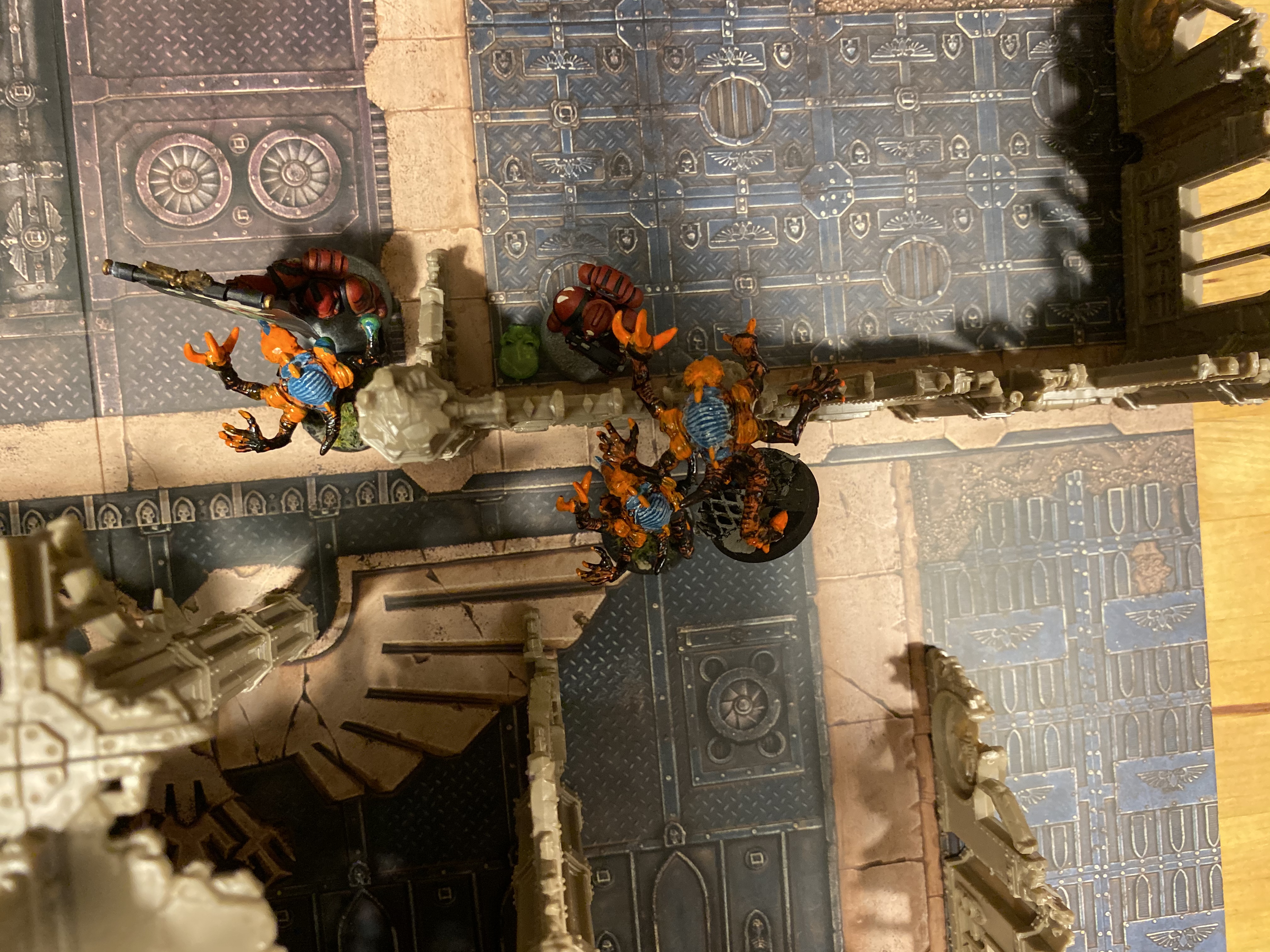 All Battle Brothers fought heroically, and slew many of the creatures. 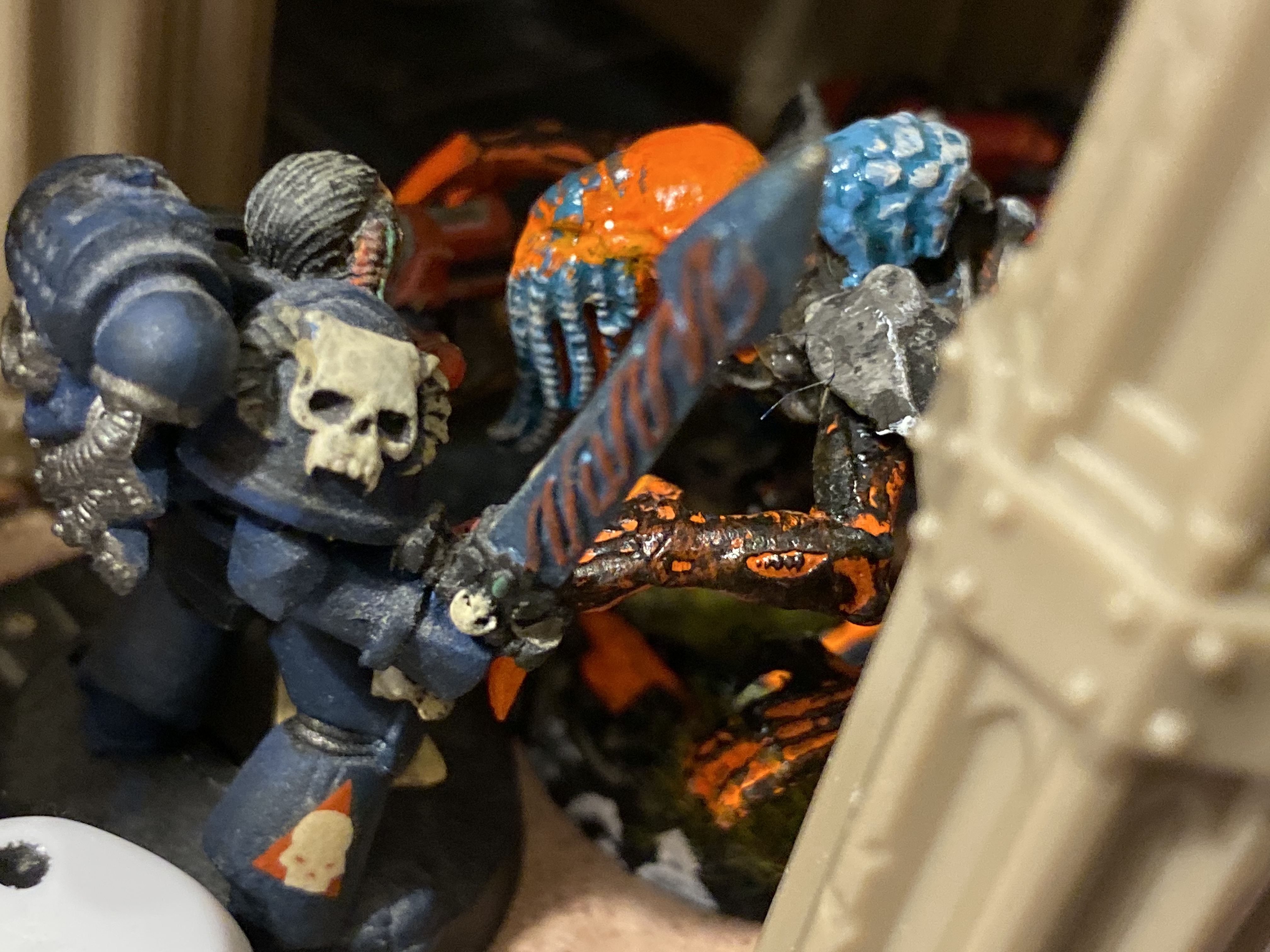 Ambrosius fought off their leader even. 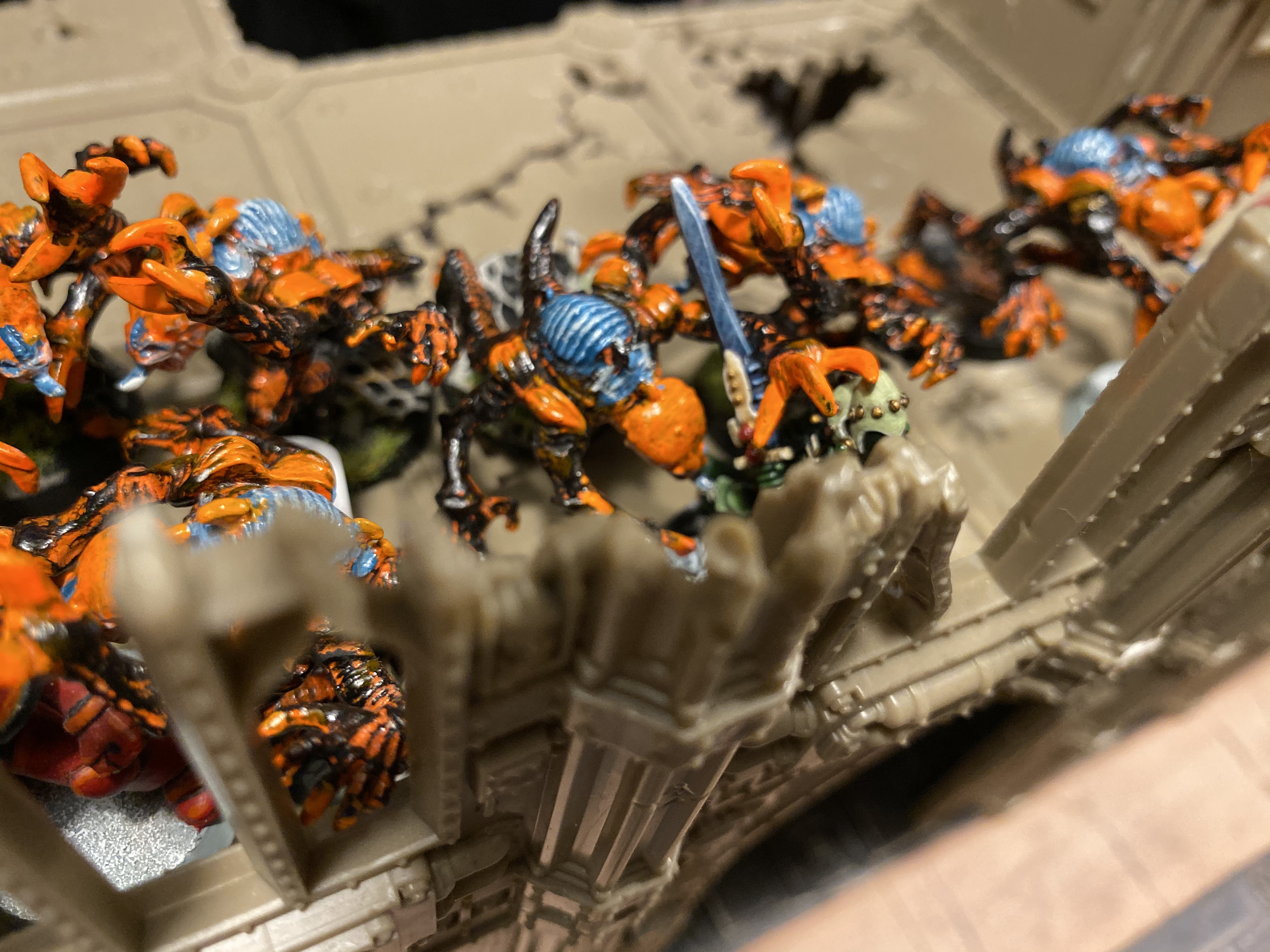 But it was too much.

The Genestealers overwhelmed the troop and swarmed over them. 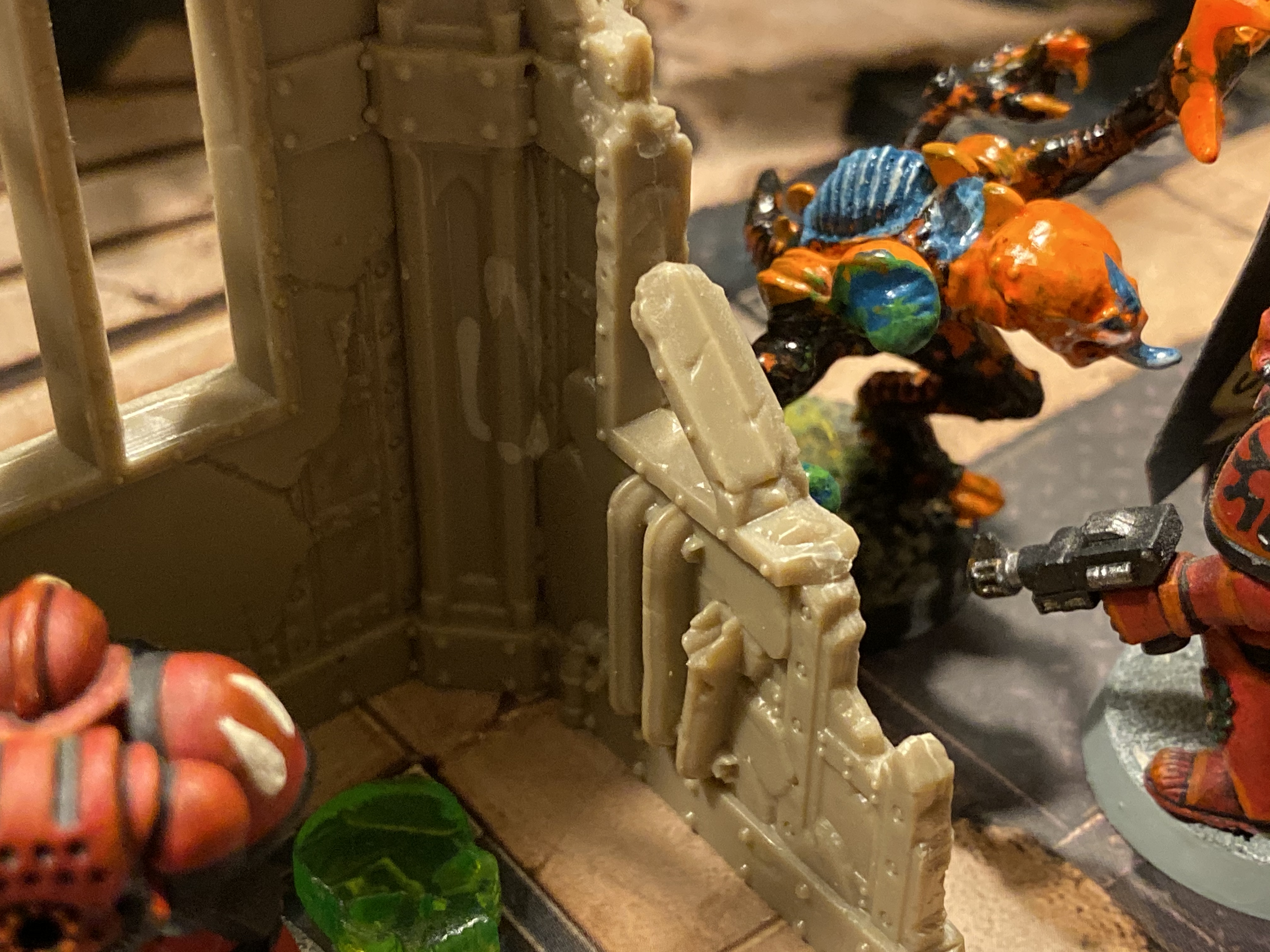 While they clawed through ceramite and inflicted terrible damage it seemed they tried to not kill the group.

Instead they swarmed around and finally lifted the unmoving bodies and carried them away. 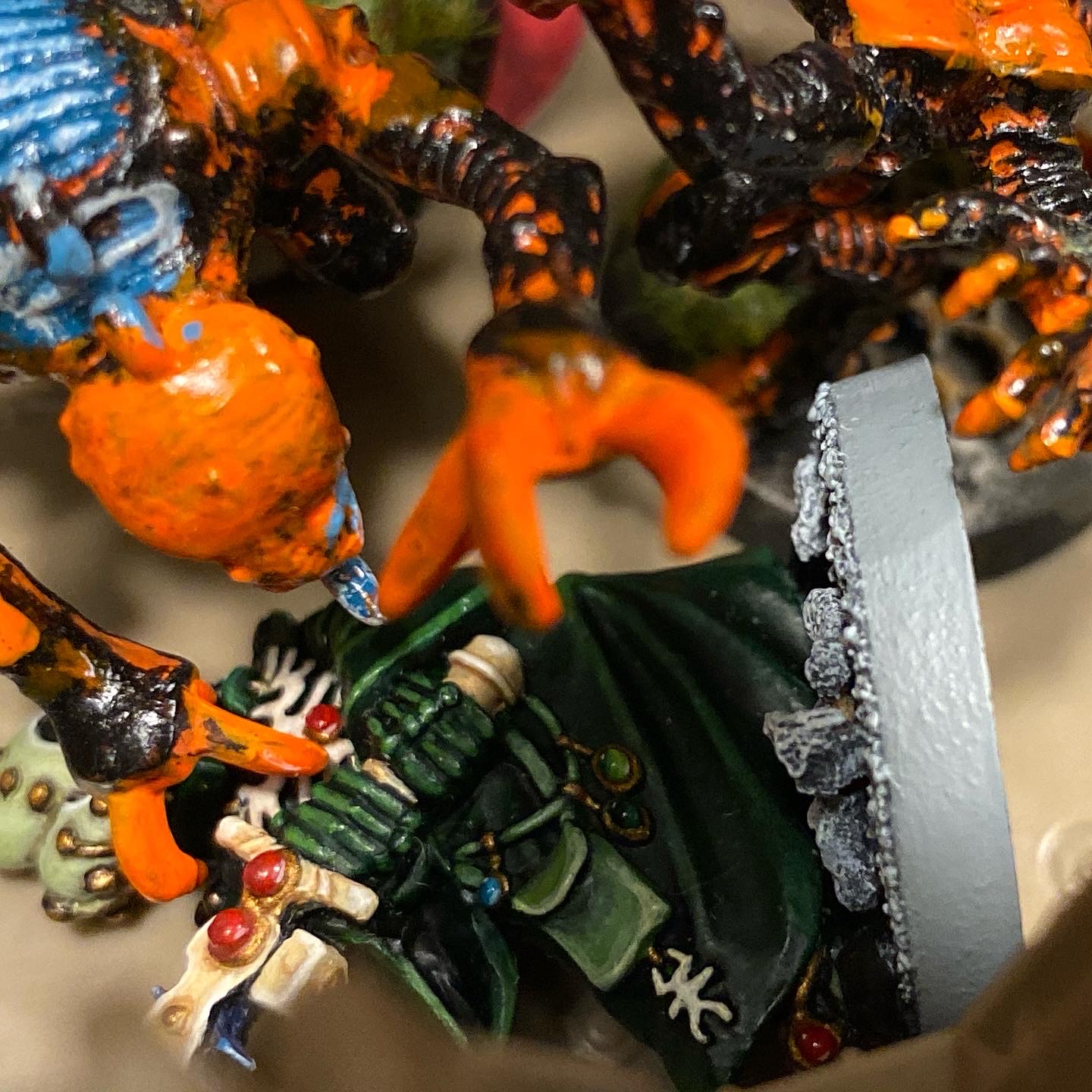